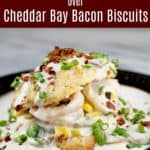 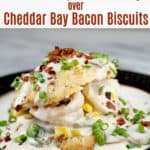 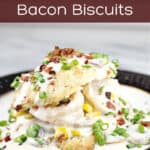 This epic recipe for Shrimp Gravy over Cheddar Bay Bacon Biscuits is as delicious to eat as it is fun to make. Cream gravy with shrimp over copycat Red Lobster biscuits made even better with bacon. Make this biscuits and gravy recipe for a delicious, creative seafood recipe with a low-country vibe.

I originally made this seafood recipe up as a challenge to myself to create a new dinner using just what I could find already stocked at home. I do this on a regular basis, to try and cut down on food waste, lean out the cans that end up forgotten on the back of the shelf, use up stuff in the freezer before it ends up tasting like the freezer.

Usually, the end result is edible. Sometimes it is really good. And sometimes, not often, but sometimes, (like this creative biscuits and gravy recipe!) the result is fantastic.

I cannot believe this shrimp gravy even happened, let alone that it was SO good. The biscuits (which are a total copycat recipe for Red Lobster cheddar bay biscuits, only I added bacon because that is how we want to roll here) are by themselves to die for as well.

And so here we are, all thanks to easy ingredients.

Using the food processor to mix up biscuit dough is something I have been doing for a longggg time. I use this trick to make pie crust dough too. We just pulse pulse pulse until it comes together, easy peasy.

Another trick I used to keep this recipe a little easier (because, I do admit there is a lot going on here) is to make drop biscuits rather than biscuit-cutter-cut biscuits. Just one less thing, you know?

Then while our biscuits are cooking, we make our SHRIMP GRAVY! This component is also very easy to make.

Steps to making the Shrimp Gravy:

One key here is to not overcook the shrimp initially. Just a little cook on each side, then get them off the heat.

This way when they finish cooking in the hot gravy at the end, they will be PERFECTLY cooked and not tough or overdone.

…Now that I think about it, if we threw in some potatoes, maybe a little onion, we would have ourselves a lovely shrimp chowder. Ha! Recipe idea right there, I’ll be investigating that soonest.

Once the biscuits are cooked and shrimp gravy is done, we just put out delicious dinner together. Split the biscuits – using a fork works best for this – and ladle the creamy gravy over. Succulent shrimp, sweet corn, salty bacon, and cheesy fluffy biscuits.

This all comes together in delicious bites you will love.

So that’s it kids. A creative, fun recipe with shrimp gravy and cheddar bay bacon biscuits.

If this recipe looks good, check out these other pantry-ingredient recipe ideas: 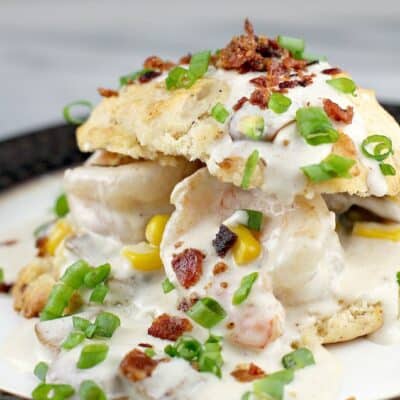 For the Cheddar Bay Bacon Biscuits

For the Shrimp Gravy

For the Cheddar Bay Bacon Biscuits:

For the Shrimp Gravy:

Keyword biscuits and gravy, cheddar bacon biscuits, shrimp gravy
Tried this recipe?Leave a comment below and let me know! 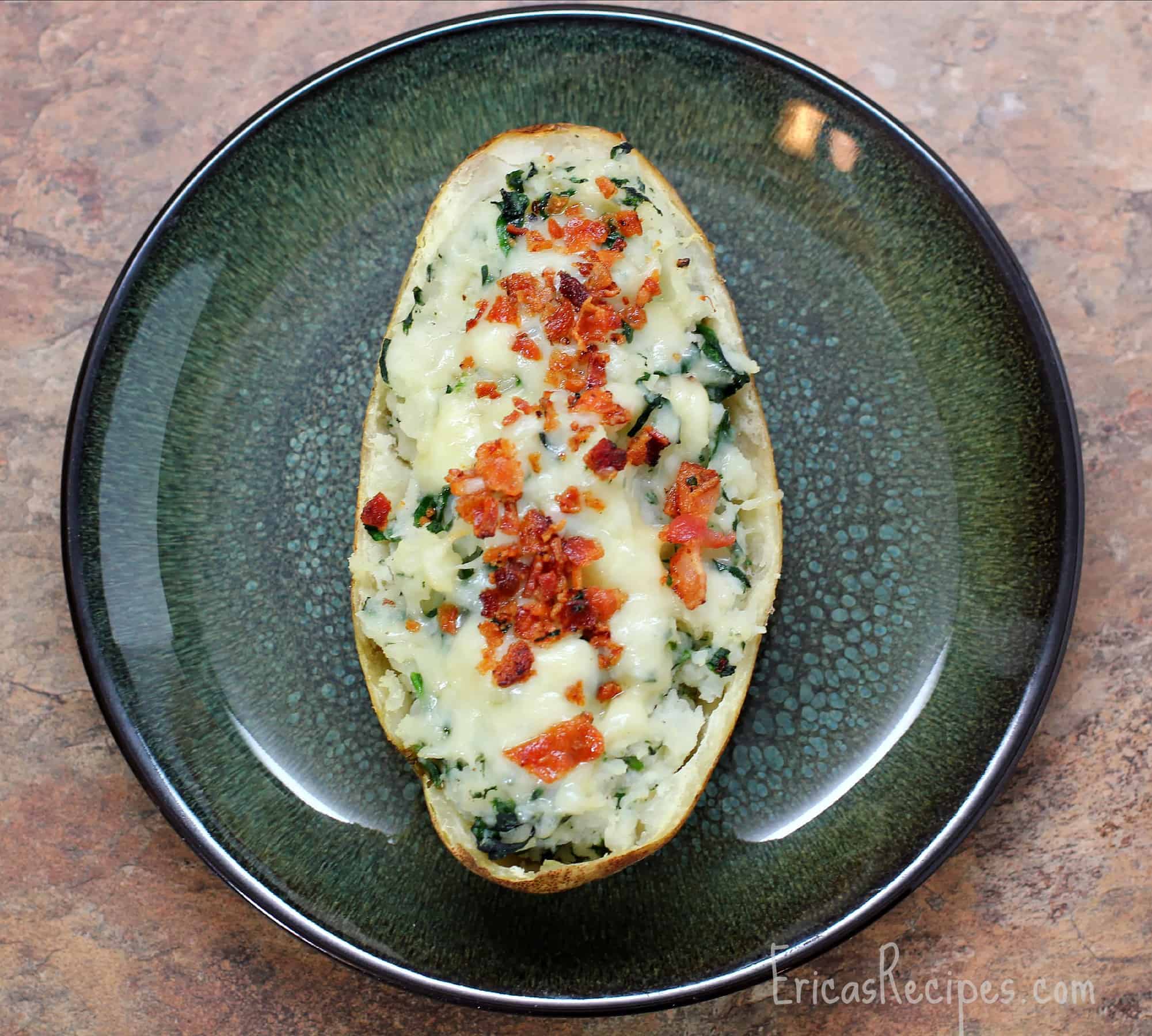 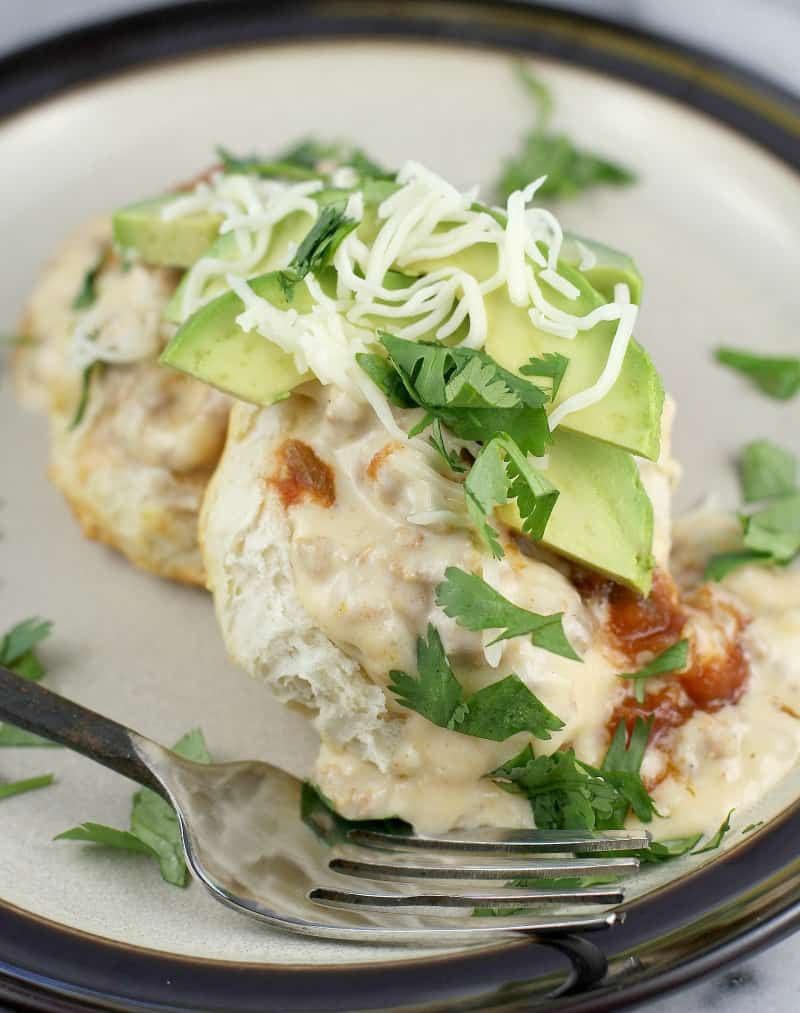 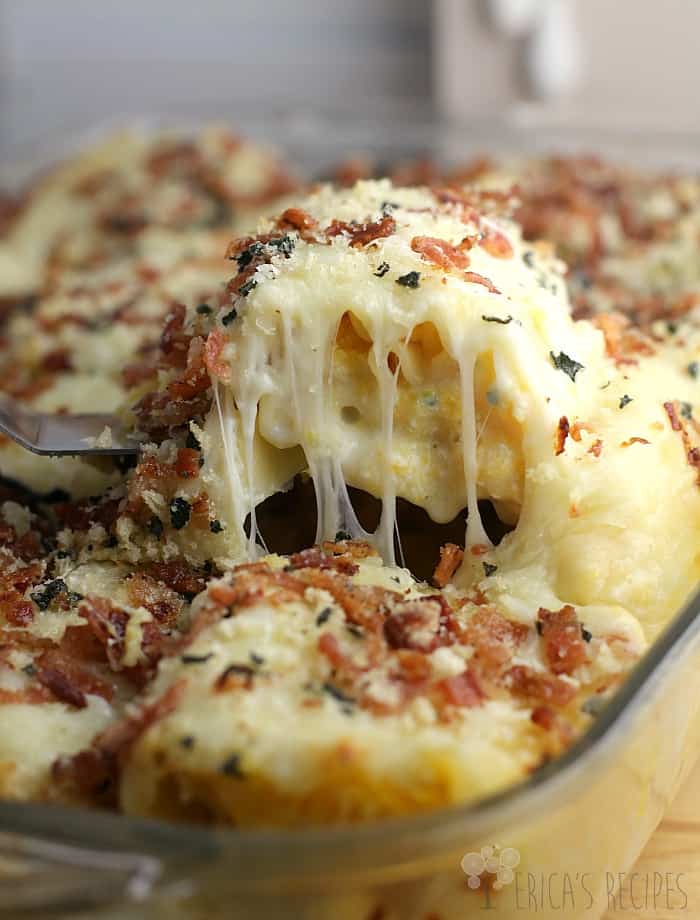 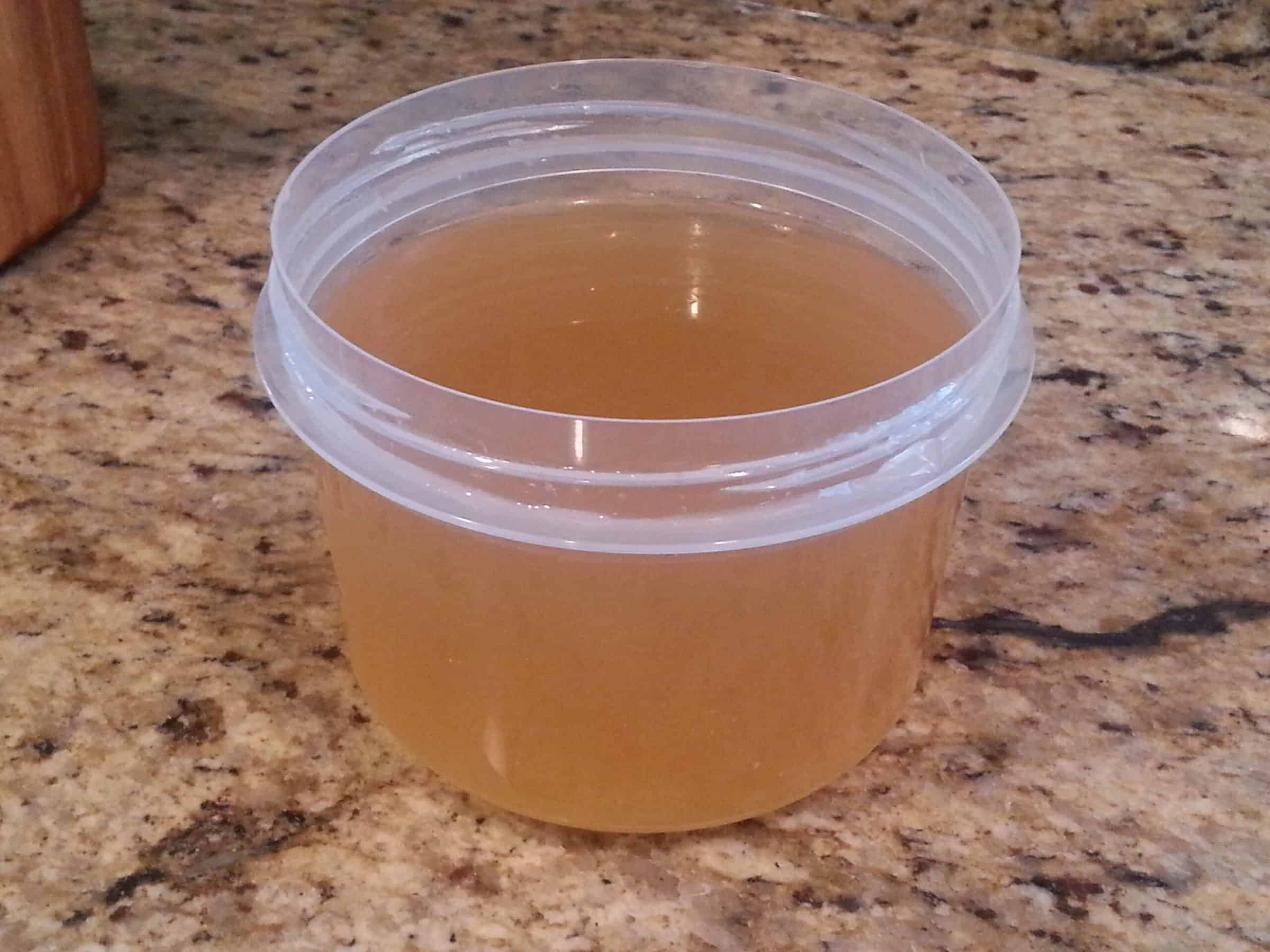 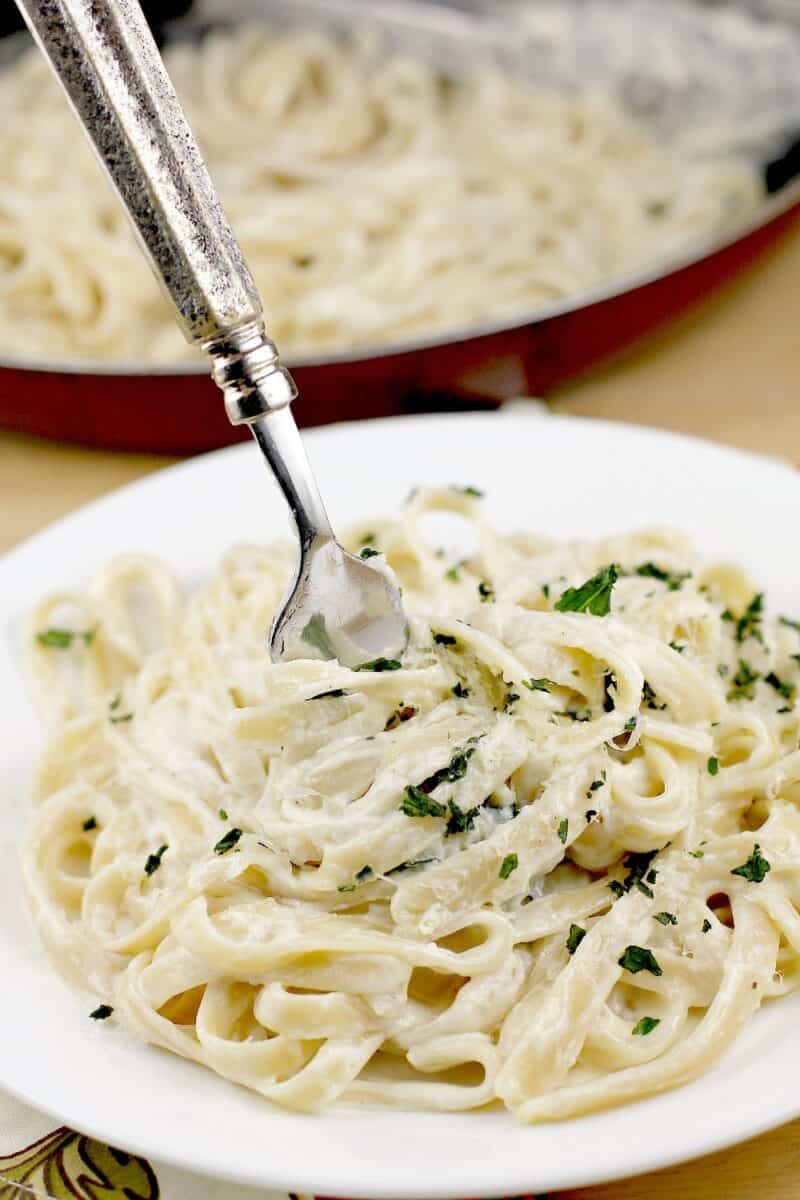 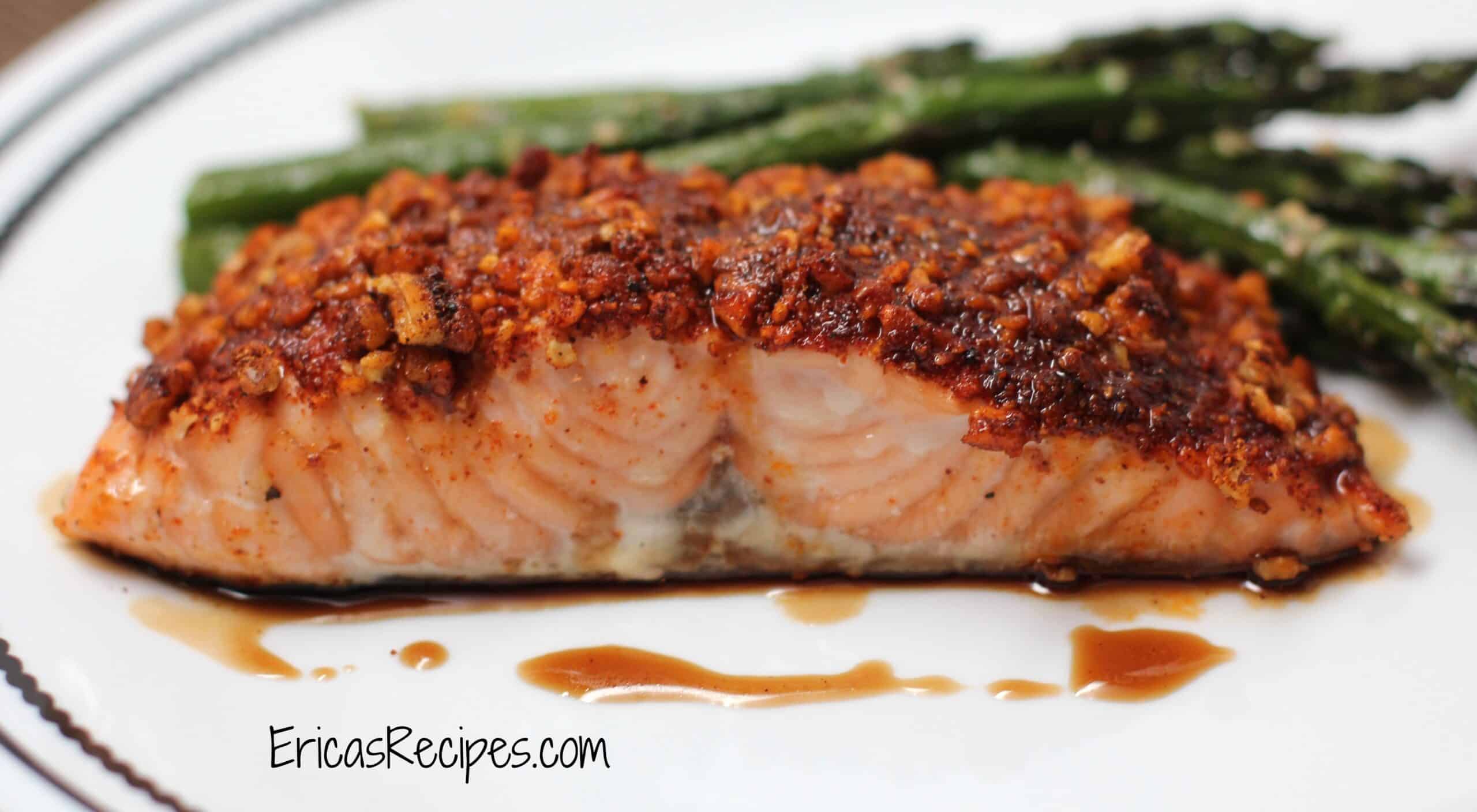