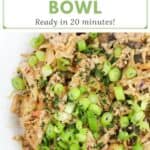 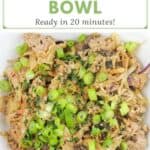 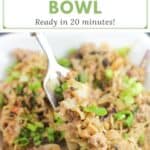 Blackstone Egg Roll in a Bowl with coleslaw has a homemade Szechwan sauce for incredible flavor and a bit of heat. Cook this easy dinner on the Blackstone griddle or stovetop. Egg roll in a bowl is ready in 20 minutes and busting with delicious salty-sweet Asian flavor.

What is an egg roll in a bowl?

Egg roll in a bowl is a fun dinner where you basically make egg roll filling and just eat it straight up. Egg rolls typically have veggies and pork in them, so we use an easy bag of coleslaw and ground pork to get the same vibe. Think of this as a stir-fry recipe with ground pork, coleslaw, sauce, and egg.

Is this a keto egg roll in a bowl?

As written, my recipe is not keto because of the honey and cornstarch. If you want to ditch those carbs, simply omit the cornstarch and replace the honey with Swerve brown sugar substitute.

The ingredients are all listed in the recipe card below. The Szechuan Sauce uses very easy pantry ingredients, all available at Walmart or the grocery store. If you can’t find rice wine vinegar, you may substitute white wine vinegar (I had to do this once and it still turned out perfectly fine).

I chose ground pork which is the usual way to make this, but you can substitute any ground meat you prefer such as chicken or turkey. This would also be a great recipe to use up leftover pork, even pulled pork.

I also used mushrooms which many people have aversion to. We love them (though, full disclosure, my son did pick them out), so I included them but you can leave them out if you prefer. If you do omit them, then omit the vegetable oil and stir-fry the coleslaw in the sesame oil.

How to make Blackstone egg roll in a bowl

Making egg roll in a bowl with coleslaw is so stinking easy! Whether you cook on a Blackstone griddle or in your kitchen, the process is the same.

First, we cook the pork until it is all nice and crumbly cooked. We also season the meat as it cooks. Then we sauté our mushrooms. Then we stir-fry the coleslaw – and the finishing touch, is cooking in a couple eggs. Done in 20!

Can the cornstarch be omitted?

Yes. The cornstarch thickens the Szechuan sauce, but you can leave it out.

Can this recipe be made keto?

Yes. Just omit the cornstarch and honey. Instead, use Swerve brown sugar substitute. 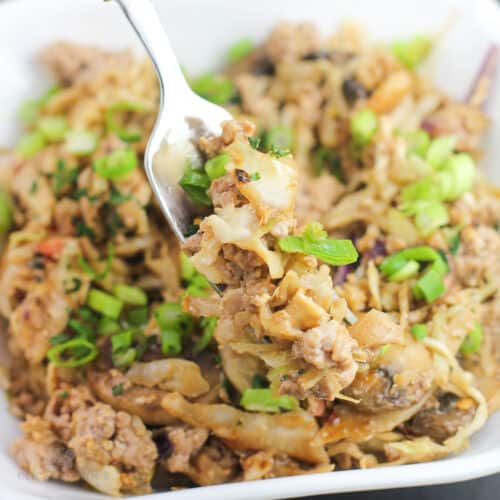 Blackstone Egg Roll in a Bowl

For the Szechuan Sauce

For the Egg Roll in a Bowl

If you omit the mushrooms, also omit the vegetable oil. After cooking the pork, use the sesame oil to cook the coleslaw. 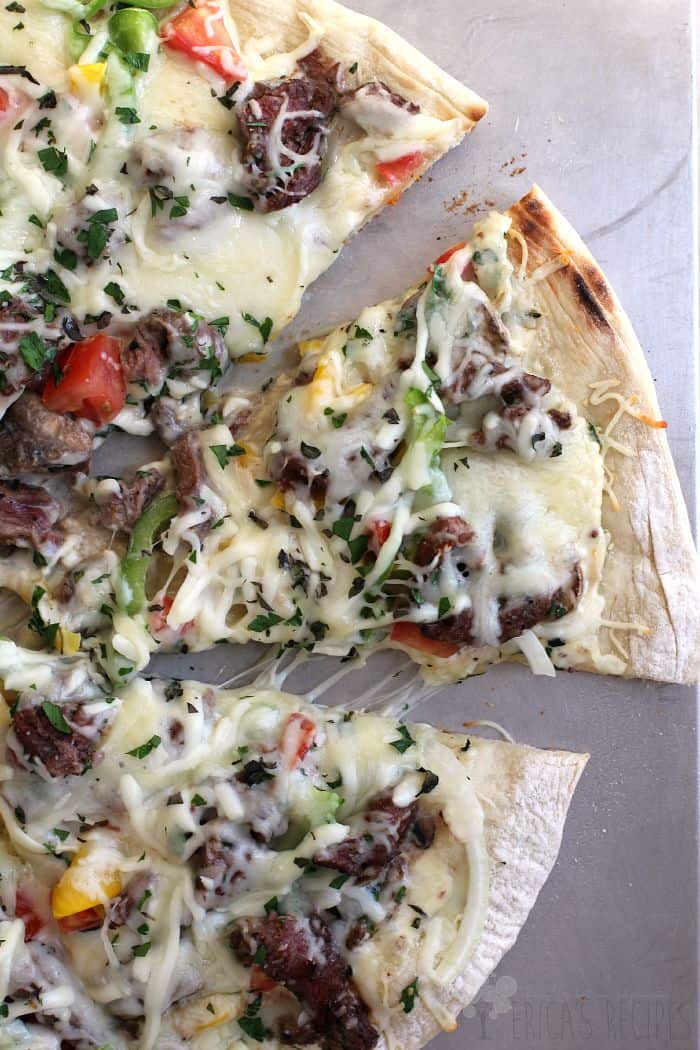 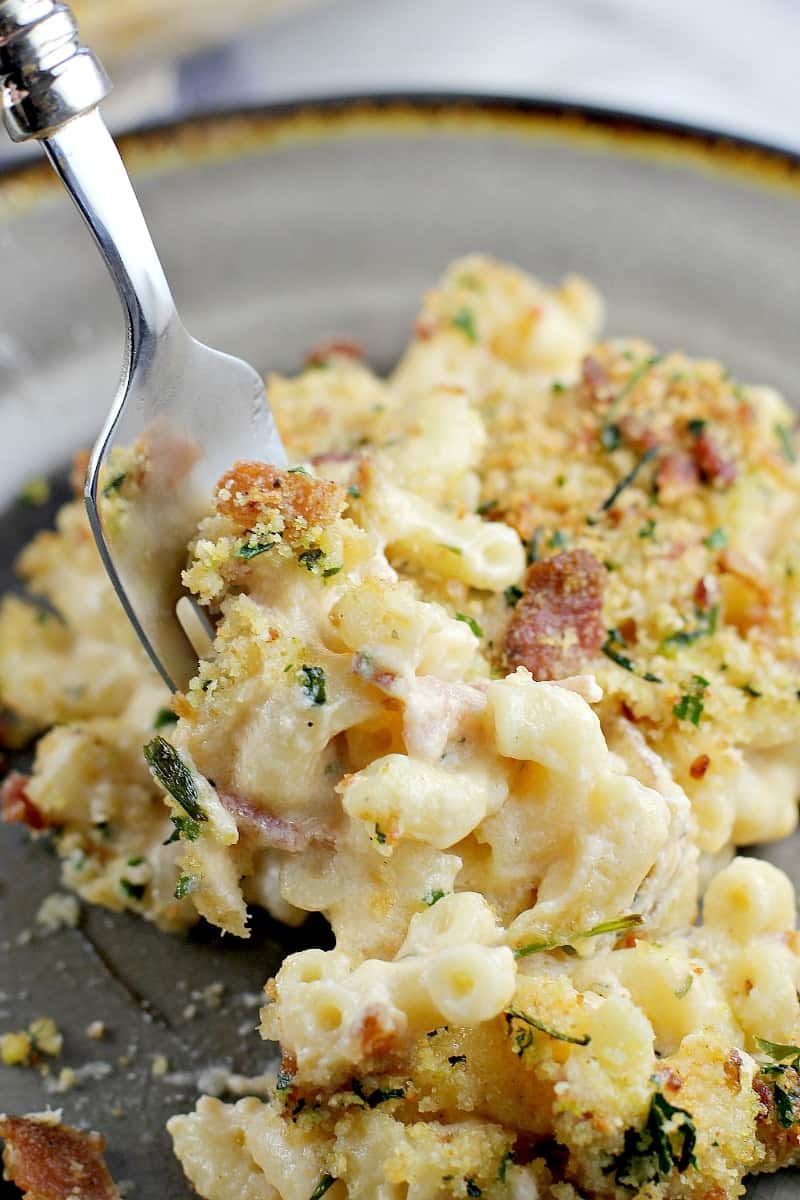 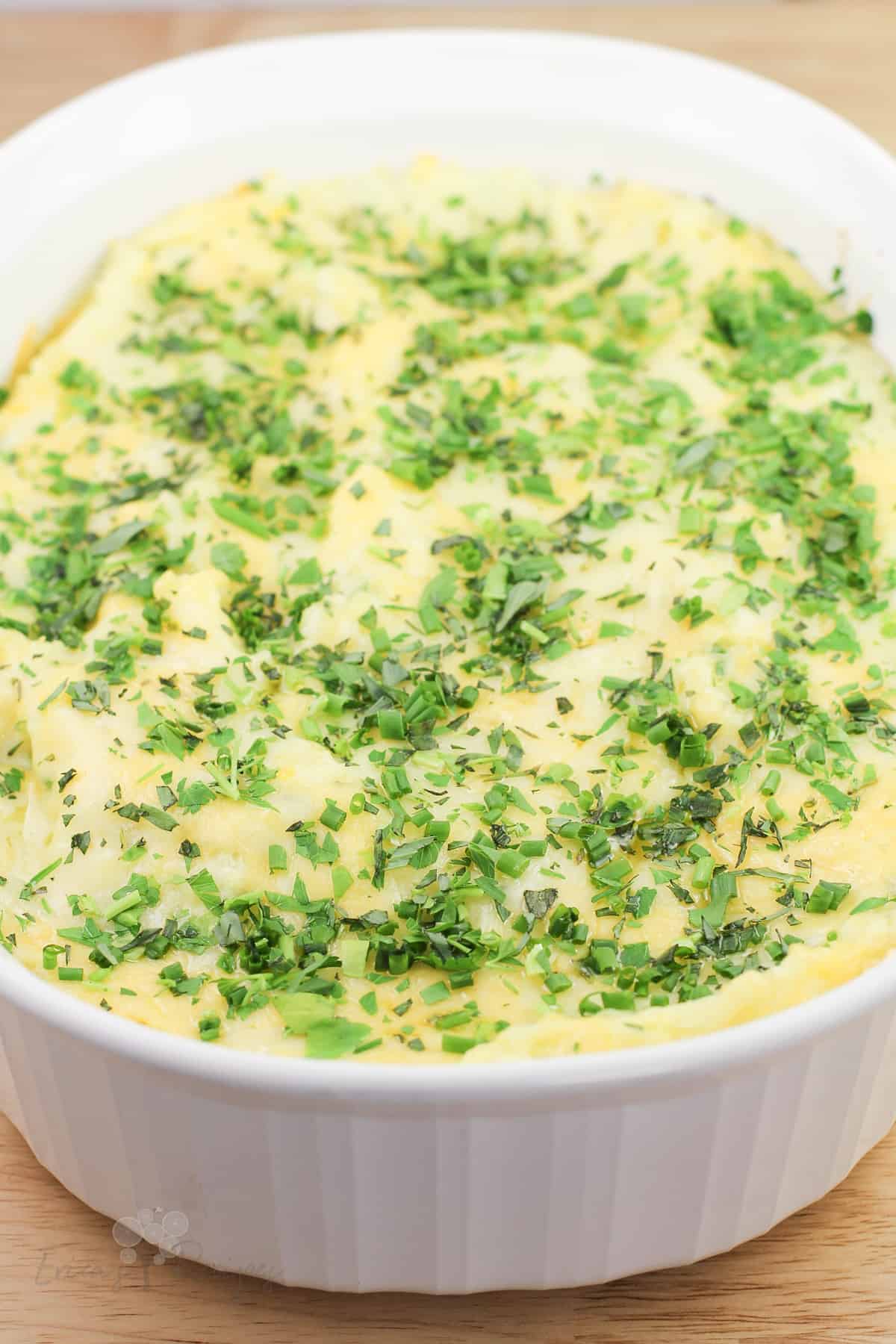 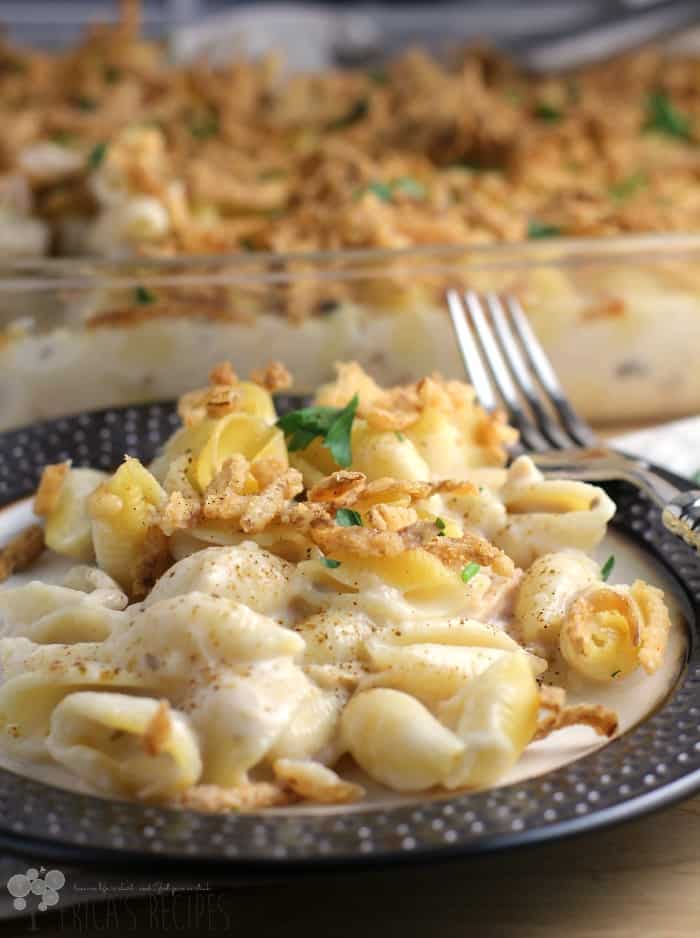 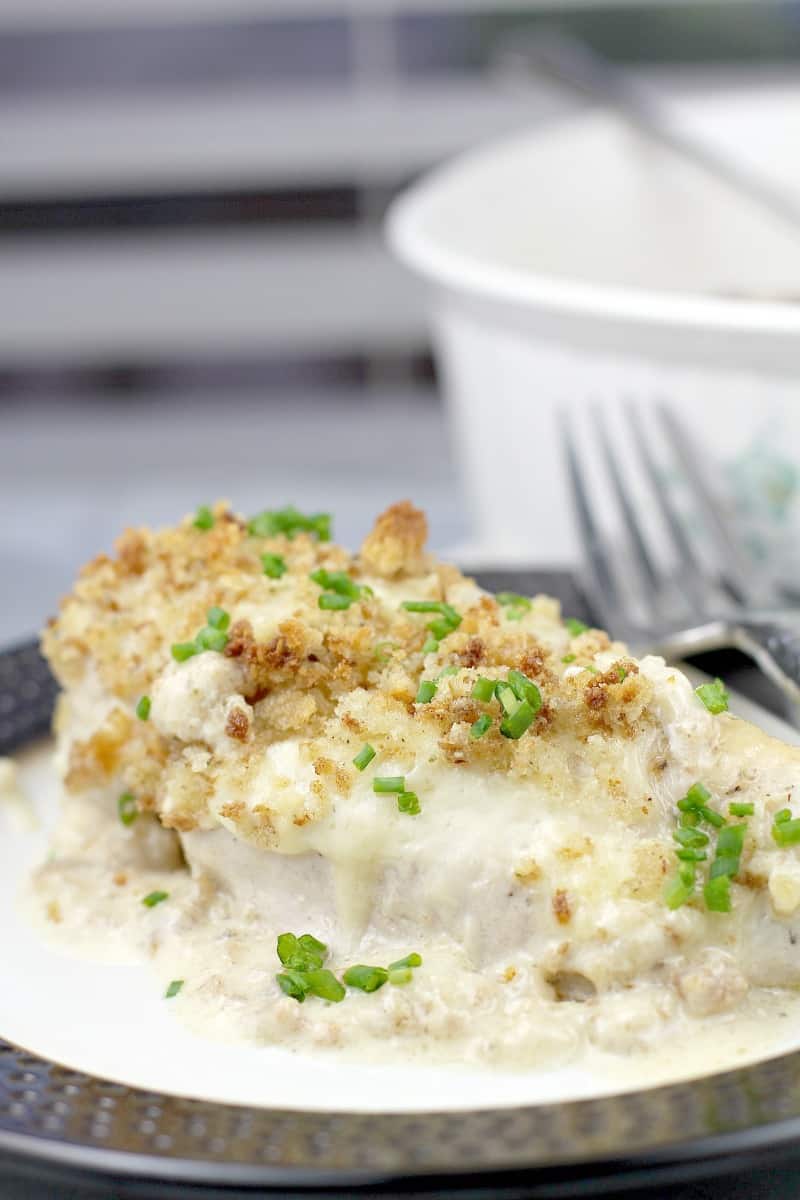 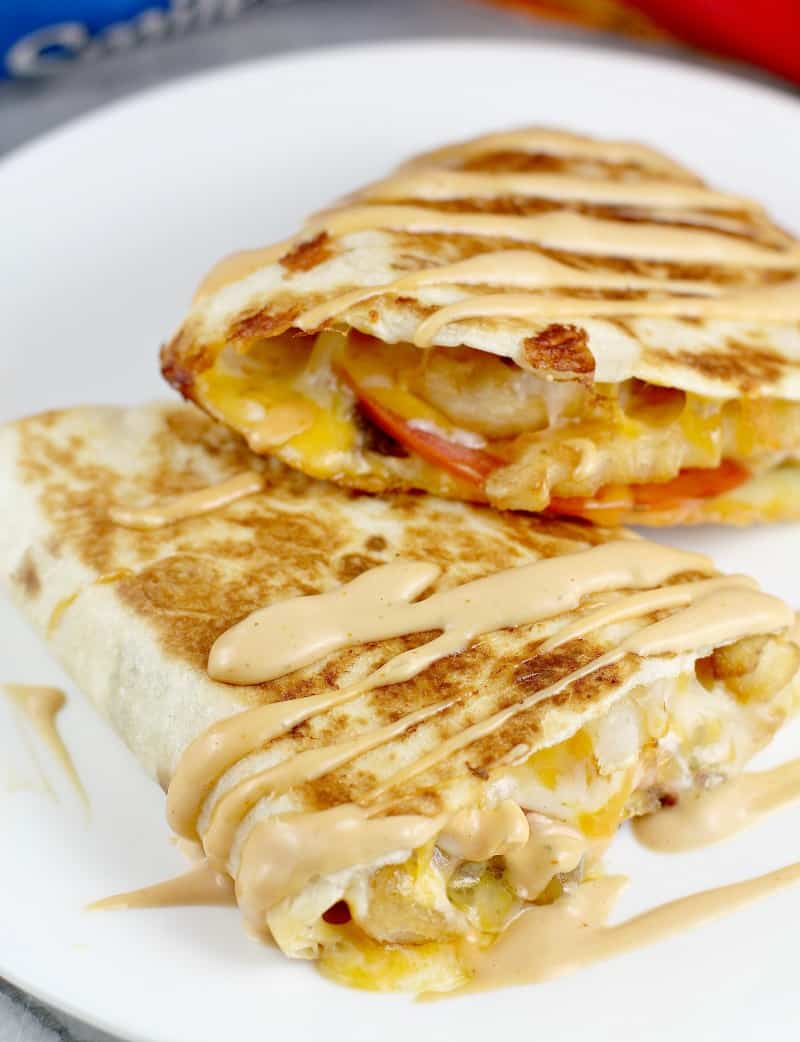